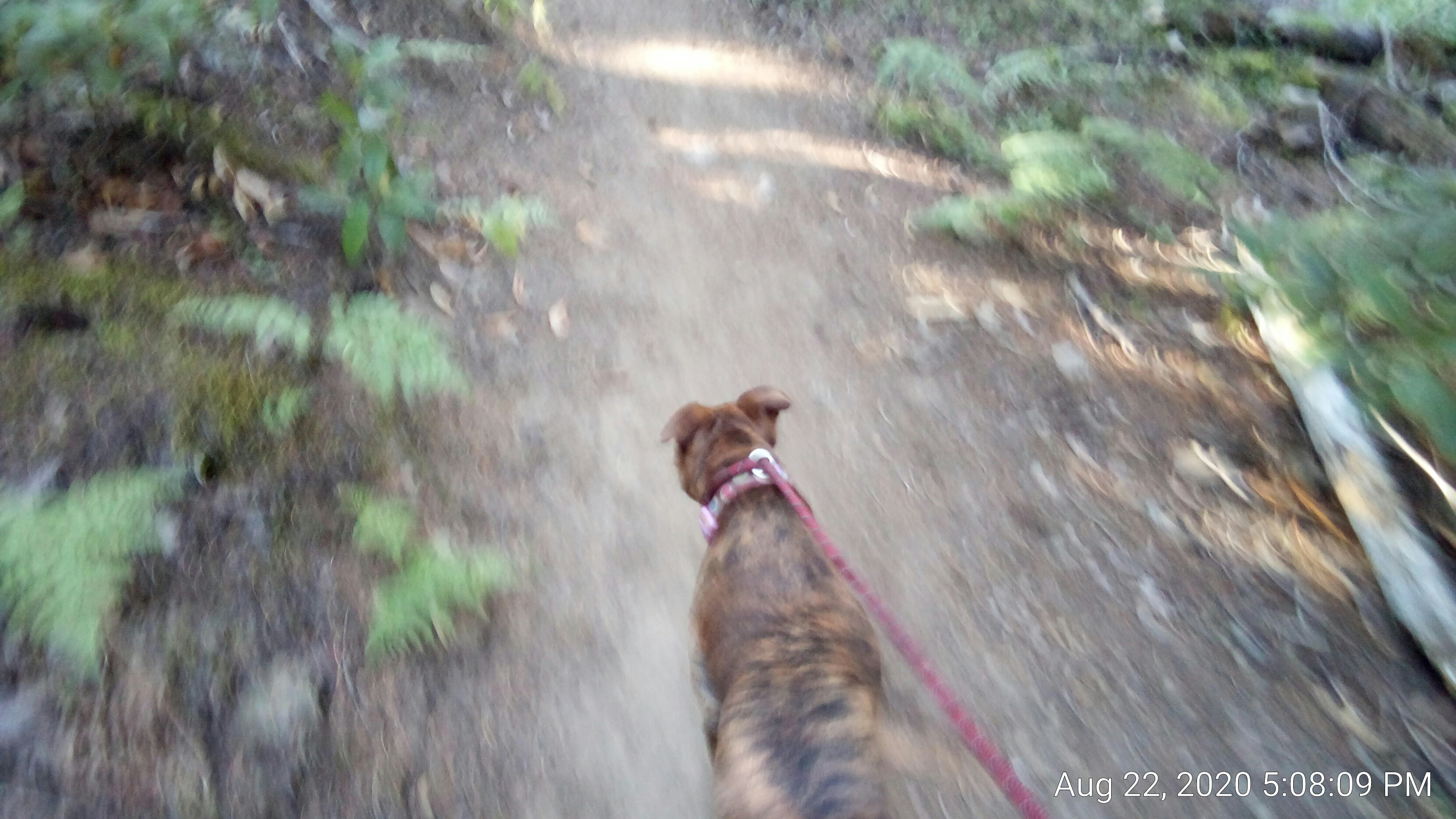 There was indeed a Trillium lake visible END_OF_DOCUMENT_TOKEN_TO_BE_REPLACED

There’s a bit of a heatwave in the Portland area (100F) that was supposed to be my next stop.   Not a big deal for Texas but Oregonians don’t have A/C to cope with such things.

It was about 10F cooler on the coast so I headed toward Seaside.  On the way there was a sign that said “DRINKING WATER .25 MILE” which caught my full boondocking attention.  Water came right off the mountain and into a concrete structure with a pipe:

Didn’t time it, but I’m guessing 2-3gpm.   I put ~10gal in the tank and refilled the bladder since it was free and easy.

Free-flowing water is a hallmark of the Portland area, in my mind at least.  Reminds me of the downtown “bubblers”.   That and wild blackberry brambles as long as a city block.

Made it to Seaside around noon, and experienced my first traffic jam in a long time.  I guess people are trying to cool off at the beach. It was 90F when we arrived and has since dropped to 86F.

Muffin and I tried to make it to water but the sand was too hot to walk on.  I was surprised since it was a light buff color: 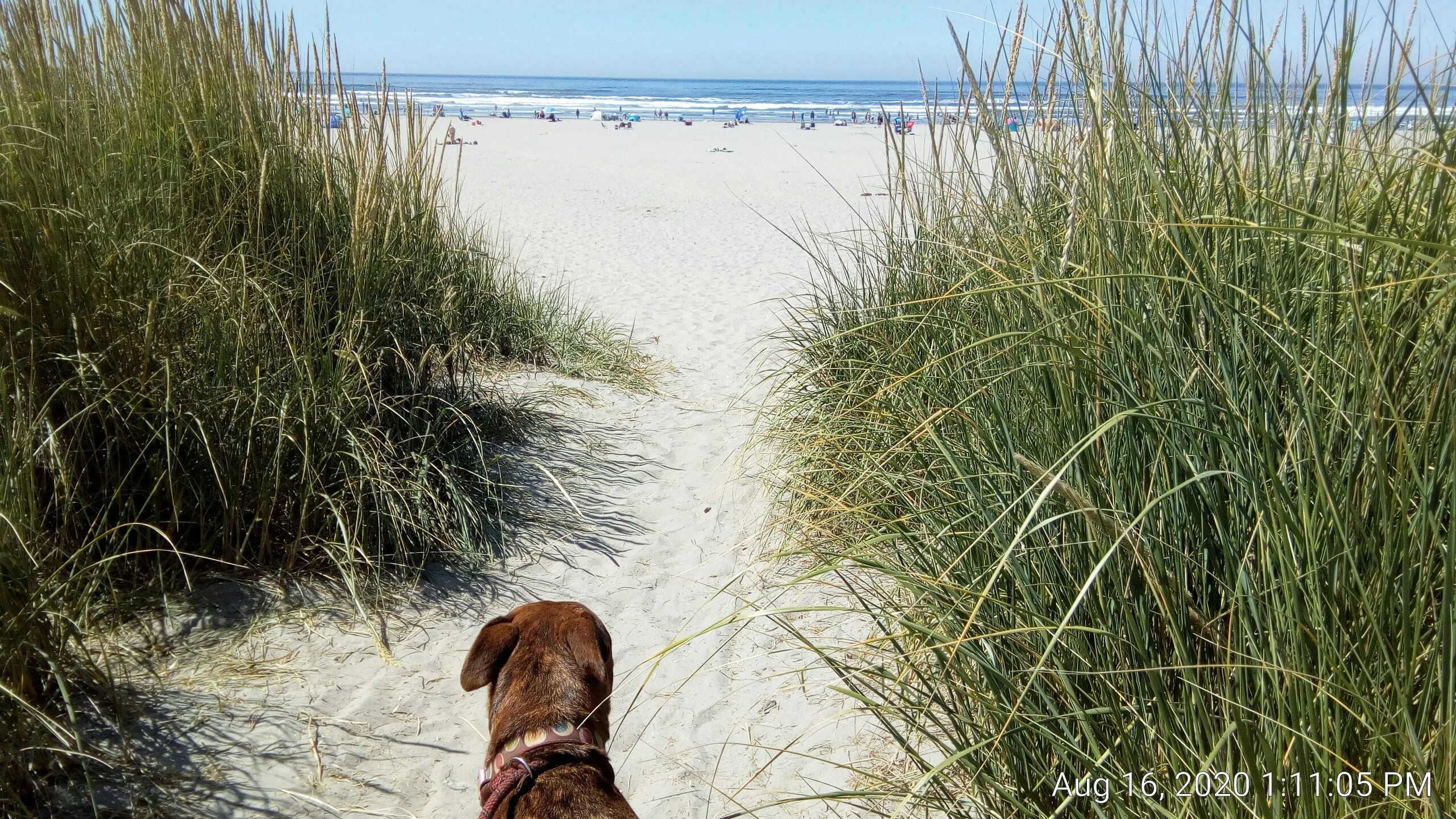 We went to a city park about a mile away to open up, reorganize, and let the dog sleep in the shade.  Coming up/down forest roads shakes everything loose and it’s a game up pick-up.

I need to do some laundry while in town.  I’ll look for a place after it cools down a bit.     My eventual goal is to re-visit Portland once the temps stabilize a bit.

I decided to take a hot shower.   I put a couple gallons in the solar shower bag and left in the sun for a few hours.  The water was actually a little too hot for comfort, but there was a brisk breeze that was a bit chilly.

The actual shower took about 3/4gal;  after I finished the formal showering I just stood there and let the rest run over me.  Small pleasures!

My daily driver laptop is a previous-generation refurb Chromebook, which I use because its power consumption is laughably low at 16w.  But I also have a real laptop (debian linux) for heavy lifting, compiling, media editing and playing Minecraft.  It’s an old business-class Dell Latitude which apparently cost $4,000 when new.  I bought it off eBay for $120 shipped, IIRC, and doubled RAM to 16BG.  Also slipped in a half-gig SSD drive a couple year ago.

It’s a beast, but tends to overheat and shut down when used hard at ambient temps above 77F.  I did some reading and it appears the thermal paste between the CPU and cooling gear was substandard and/or poorly applied.  Since it’s not my main PC I basically just avoided the issue, but I did order some well-reviewed thermal paste off Amazon.

Today I finally pulled the cover off, removed the old paste and applied the new.  I stress-tested with Minecraft at 78F and it didn’t get squirrelly, so hopefully it’s fixed.   I have some CBSRMT tapes I want to digitize and edit, which will push the CPU around a bit.  We’ll see.

Yesterday afternoon I was thinking about the best way to get, transport, and dispsense water from the pump.  Spigot bucket!

I took the bucket over and rinsed it out.  I paid a bit more attention to the process this time.  The dead-lift resistance on the piston is maybe 40# and this stroke is about 12″.   Luckily the big nail/spike inserted though the lift bar is at bicep curl level – not easy, but at least at a convenient height.  A little handle leverage would be welcome. 🙂  The top of the existing structure (minus handle) comes up to my eye level, so probably 5′ 8″. 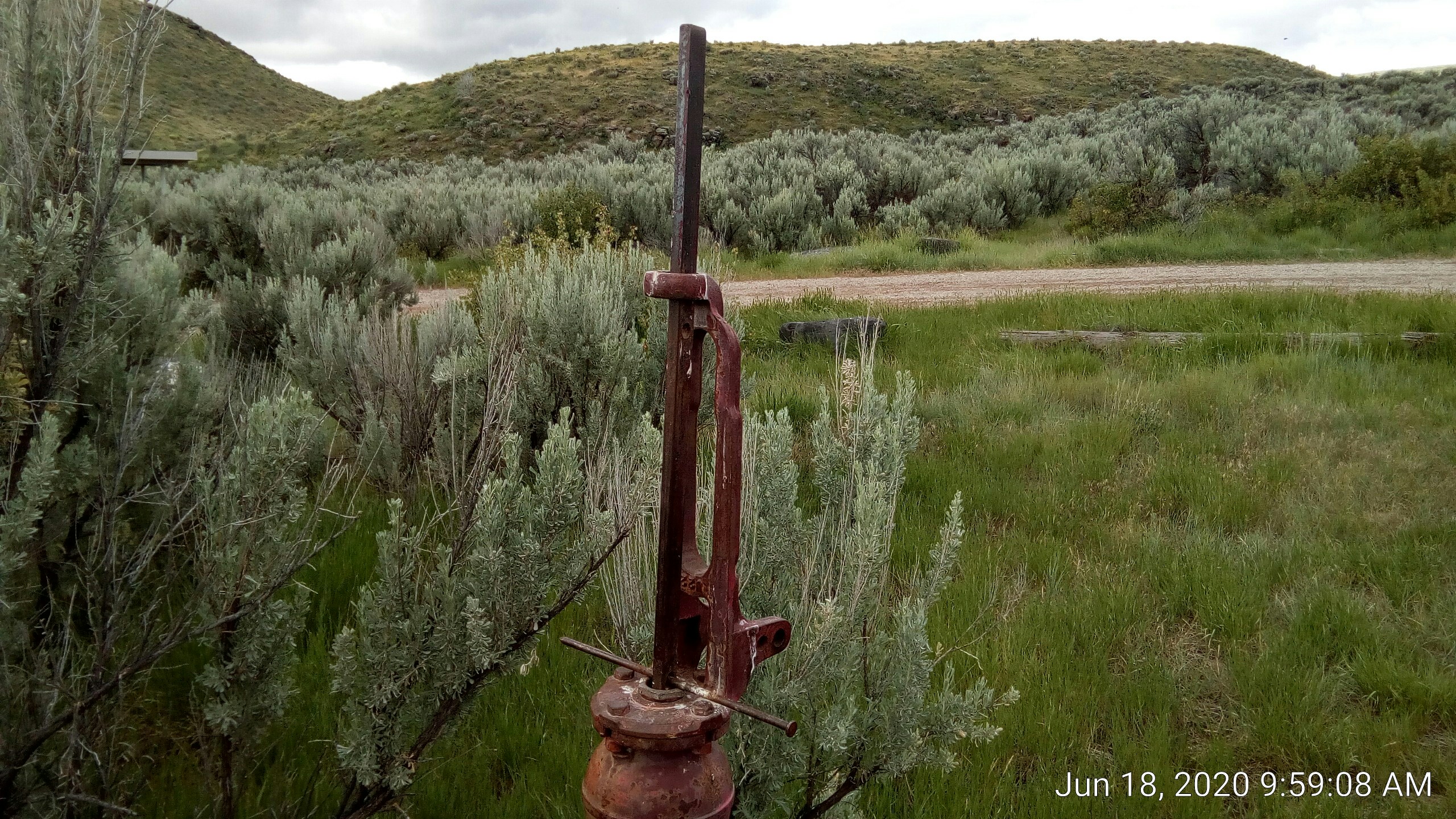 The spike is easier to see in this pic.  It’s pretty rough on the hands, even with gloves on.  I tried to make pool noodle pads, but it just ripped through. END_OF_DOCUMENT_TOKEN_TO_BE_REPLACED 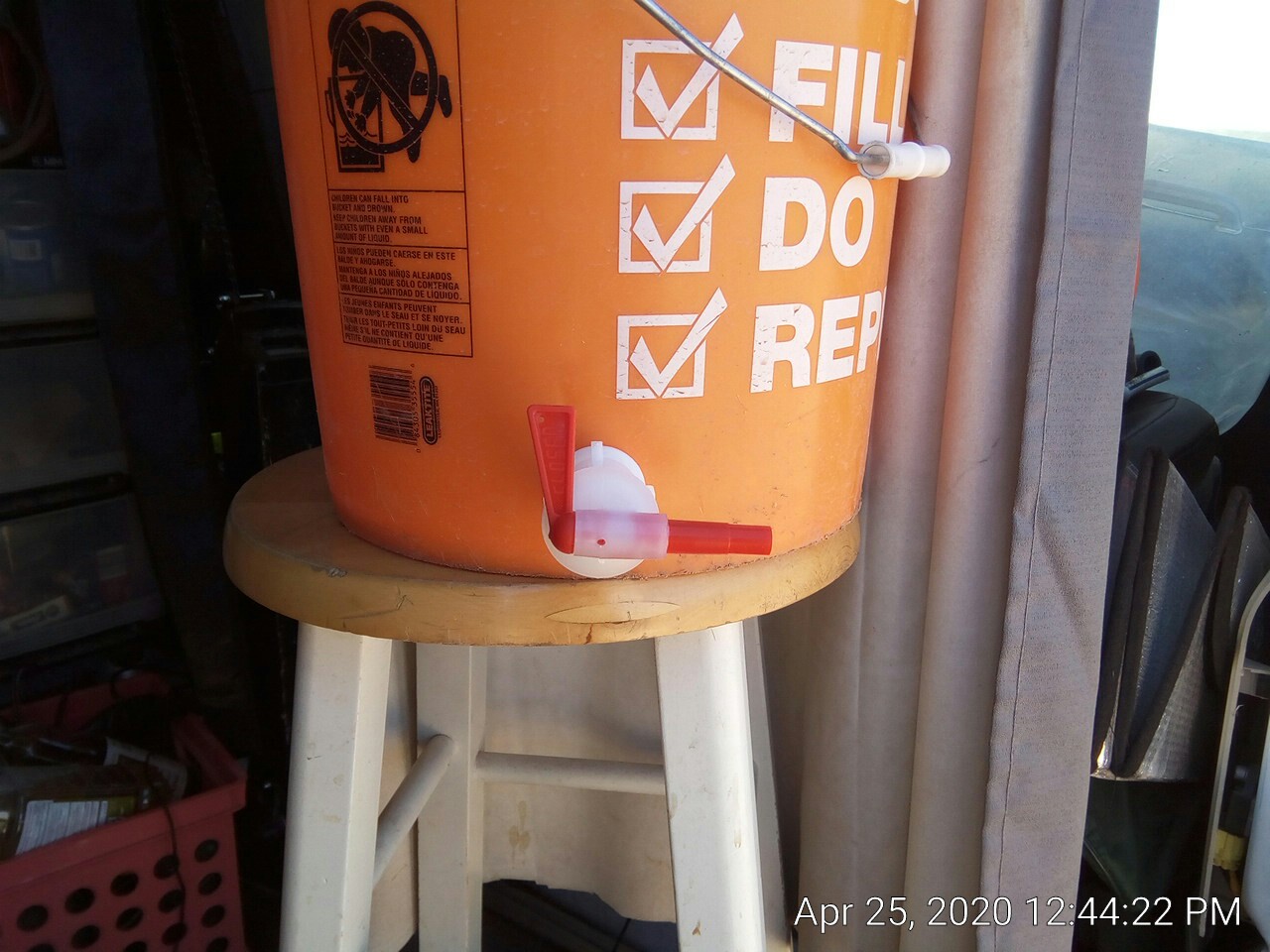 I’d picked up the spigots off Amazon last month.  They are typically used for bottling homebrew – the [primary] fermented beer is racked into the priming bucket, priming sugars are added (whether reserved wort, dextrose, sucrose, etc), mixed gently, and bottles filled/capped.  In this case it will be used for rain- and freshwater handling.

By the time the spigots arrived I’d decided against installing them right away.    Probably because I was using the 5gal soft water bladder.   So I stored them (ie, hid them from myself).

So I ended up in an impromptu half-van organization today.  During the search/organization I was moving a gallon of distilled water and dropped the container;  it got a hairline crack.  Dangit!   It’s the water I use for my flooded lead-acid battery bank, so first off I topped off the battery waterer.  Then I topped off the windshield sprayer reservoir, and dumped the remainder into my fresh tank.  Normally I wouldn’t drink distilled but I figure diluted in 9gal of fresh should be no harm, no foul.

in praise of the spigot

Finally had a successful run of rainwater catchment, though it was rough at start.

I rejiggered the tarp when the clouds gathered again: 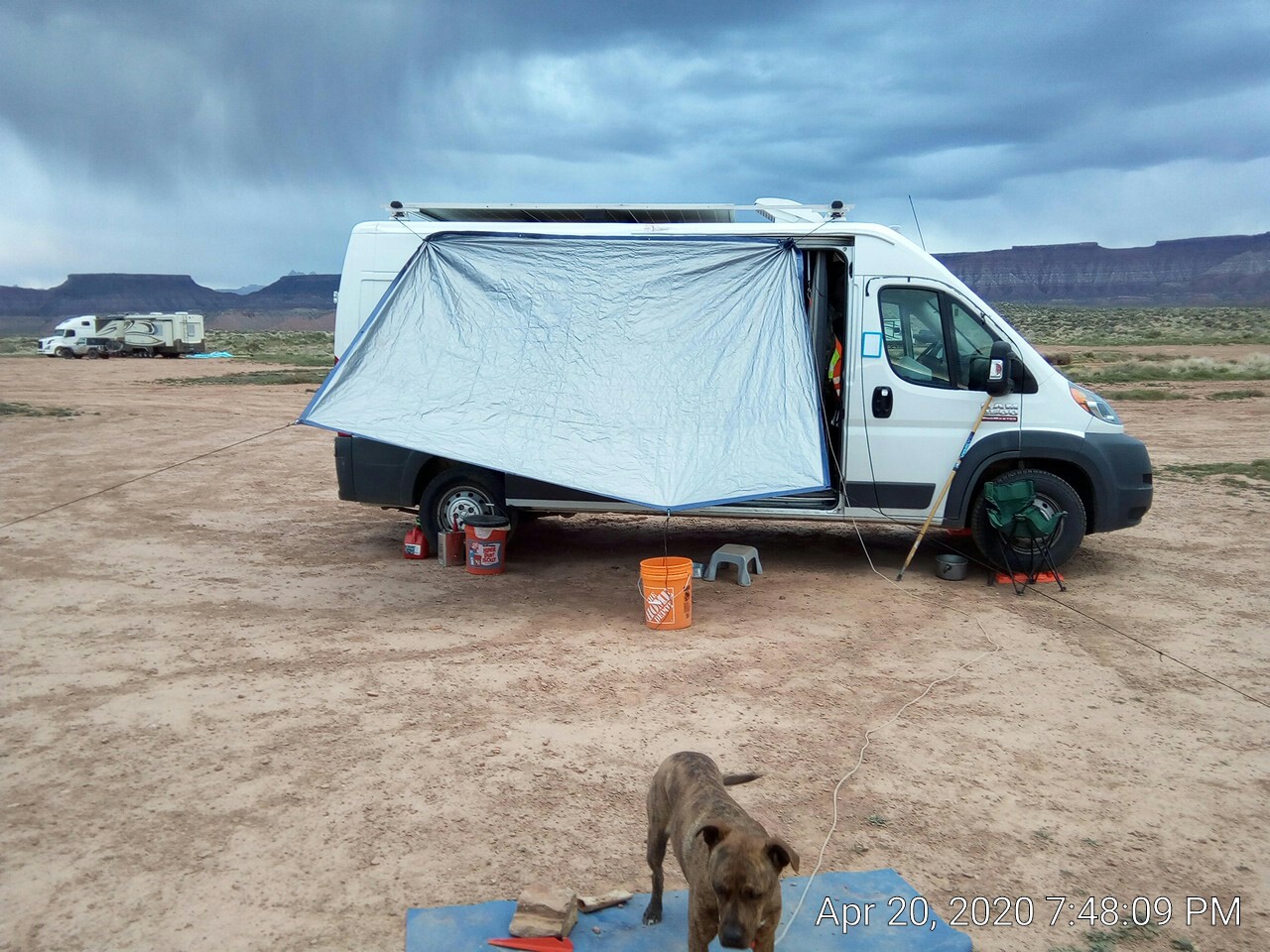 This method has more surface area but is less likely to funnel rain where i want it.   More experimentation needed.   It rained medium-heavy for a short while and I was feeling optimistic – before I went to bed there was a steady stream of water going into the bucket.  Rain let up and I got up in the night to check on it — the bucket had been spilled (knocked over and several feet away in the mud) when the tarp moved in high wind.  Argghhhhh!  The water from the brief period of good rain was  lost.

I fixed it so that wouldn’t happen again, getting cold, END_OF_DOCUMENT_TOKEN_TO_BE_REPLACED

Muffin and I walked south today to see that part of the canyon: 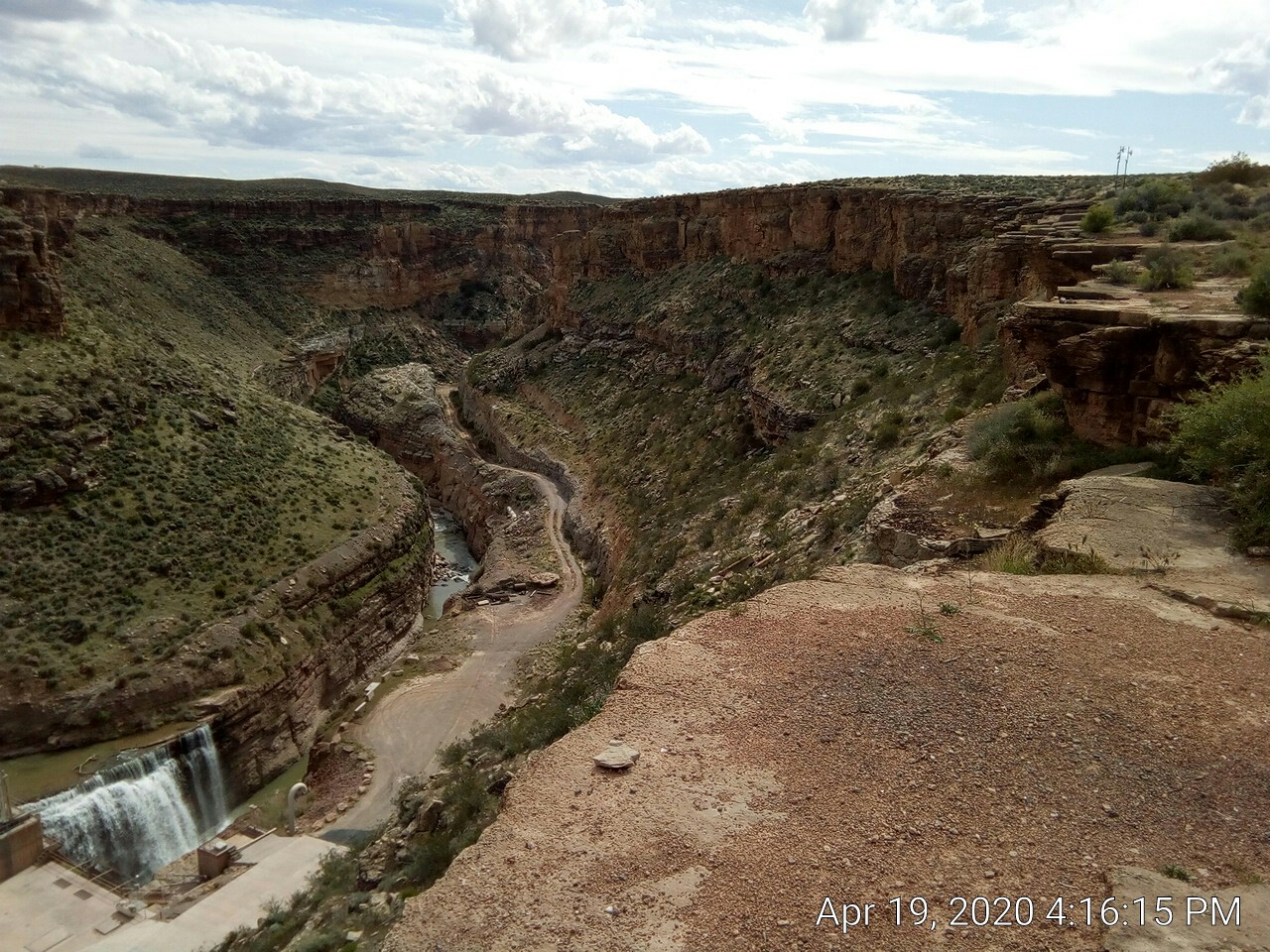 There’s a dam down there in the lower left, and a line-of-sight comms install for it on the canyon rim in the upper right.

As we came back on a different part of the trail we saw a small group of people in odd positions/poses in the distance.  Took a while to figure it out without binos, END_OF_DOCUMENT_TOKEN_TO_BE_REPLACED 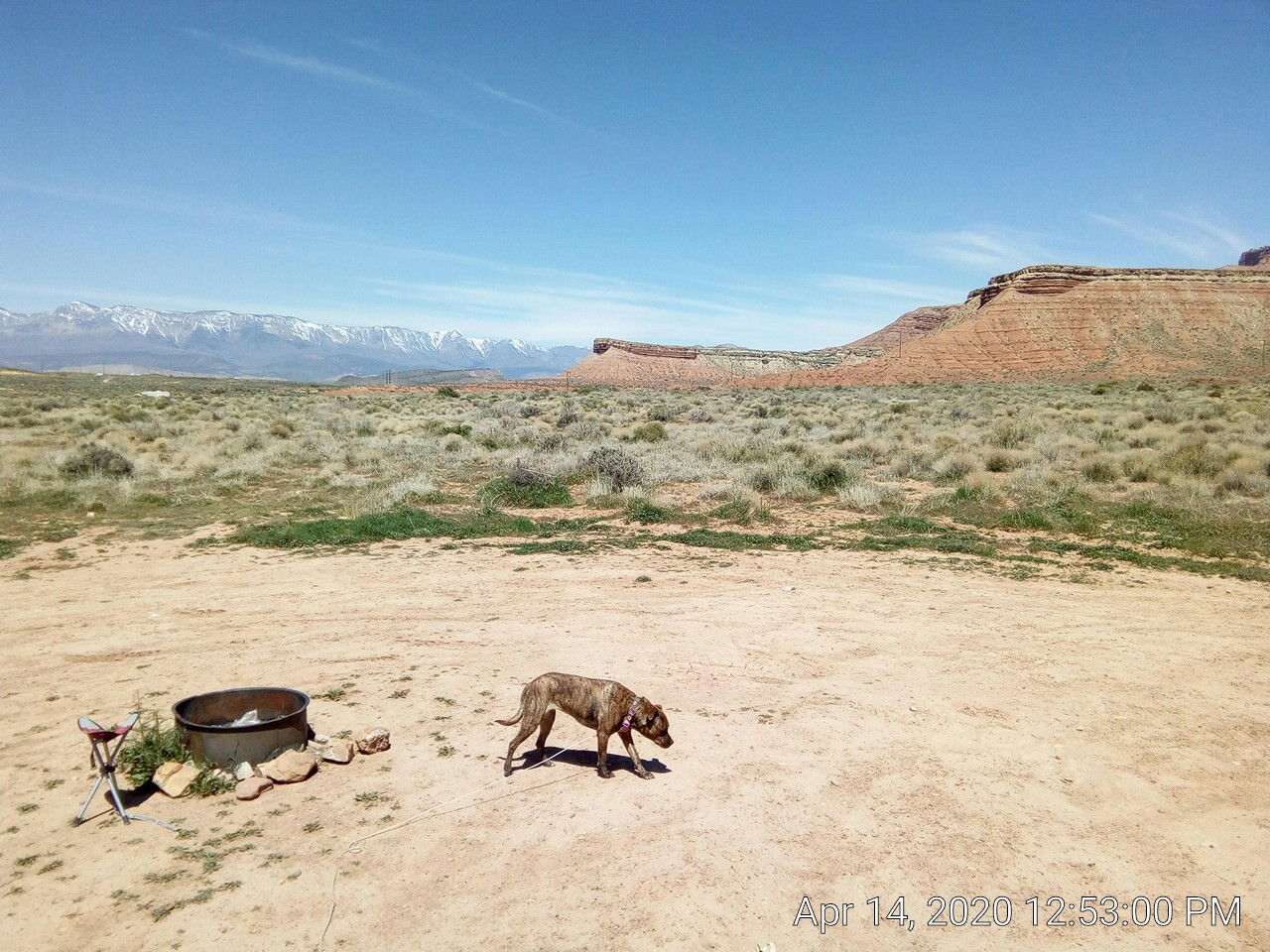 Spent the morning in St. George, picking up the Amazon loot and reprovisioning.  The locals were taking a reasonable line on Covid, distancing but not losing their gourds.  Maybe 1/3rd of people were masked up.  I had made one out of a shirt I didn’t like and I did cover up.  No biggie.

The water kiosk outside was wrapped up with a sign saying it was unavailable.  Hmmmm.  Dunno if it was a tech problem or public health overreaction.  I still had about half my fresh water tank (half of the original 35gal) which should be enough for another two weeks, but that makes me nervous.

I found a park on my way out of town and used a water bandit and short length of hose to hork 5 gallons;  that is enough of a buffer that I’m not [overly] worried about not filling up at the kiosk.  It was a low-flow faucet, maybe .3gal/min so I only took the one bladder full.

Other cities in arid areas have lots of standalone water kiosks where you can buy water for pretty cheap;  haven’t seen any in UT so far.  Weird.

Back to camp.  Here’s a view to the SE of camp: 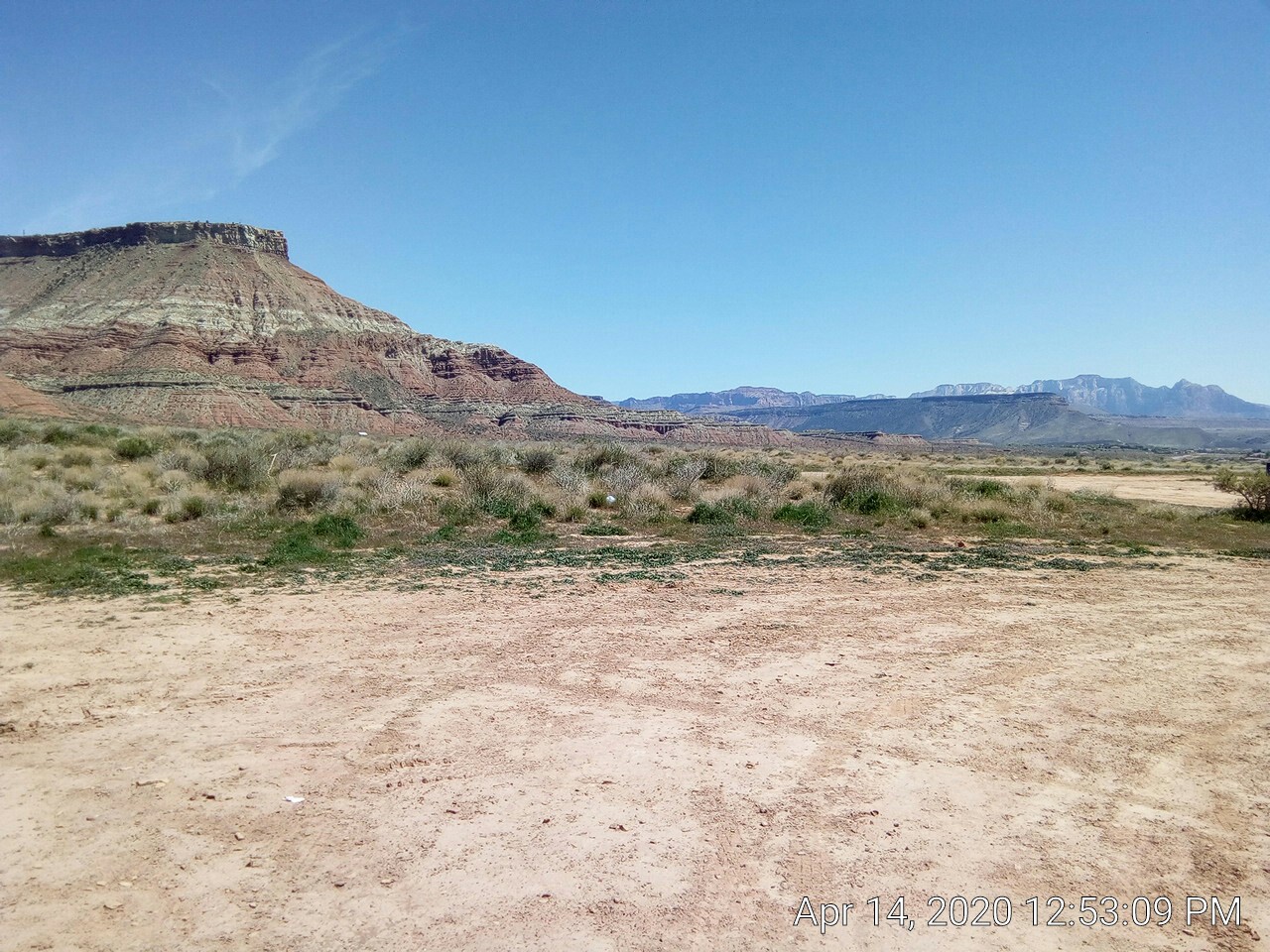 It’s  a designated BLM camping area (on the little marker poles) so there are folks nearby.  There’s a Class A about  200′ to the west, and a couple Class Bs to the south: 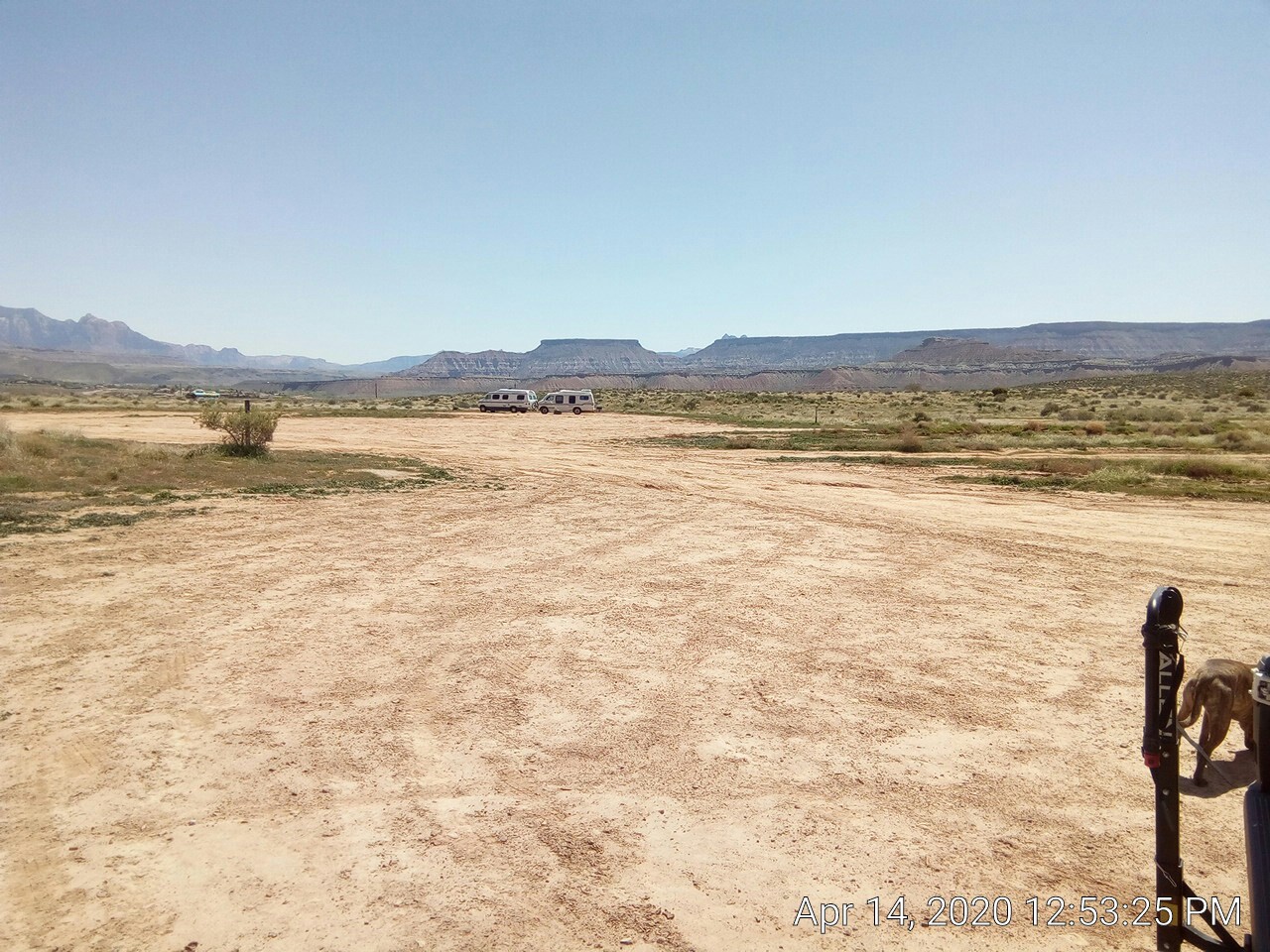 Everyone is quiet.  I assume it will be crowded and loud on the weekend, but that’s part of the deal. It’s our public land.

The Verizon is 2-3 bars which is the best I’ve had on BLM land lately.

Note:  when prepper people talk about “zombies”,  undead are a metaphor for any challenges one might meet.  It’s not about literal zombies.

As (I think) I mentioned earlier, I am camped outside Pahrump, NV on BLM land: 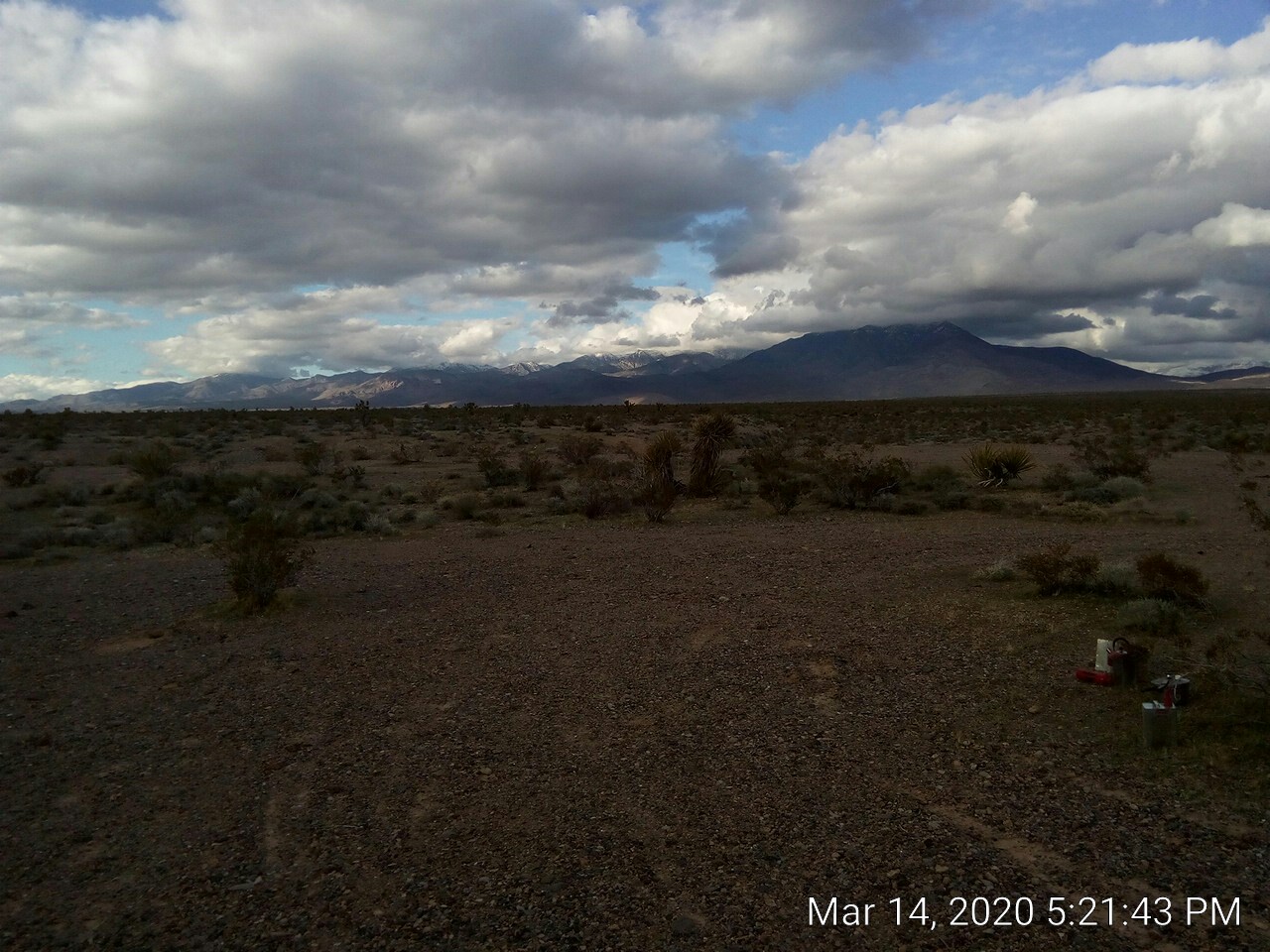 There is snow up there on the peaks though it’s a bit hard to see. Easier to see in this pic.

Anyhow, I went into town to reprovision food and water.  In general I make my WM runs on Sunday mornings or during sporting events;  both of those tend to reduce the density of shambling hordes in the aisles.   END_OF_DOCUMENT_TOKEN_TO_BE_REPLACED

It’s been raining off and on for the 48hrs, keeping dog and I indoors and putting a damper on solar harvest.  Presently pulling in 91w .  That’s 16% of theoretical system maximum, typical for medium-brightness overcast conditions.  Dark overcast is usually 10% of max and bright overcast about 33%.

Yesterday I finally remembered to set out a container for water catchment;  I got a pint.  Made my normal 2c of coffee from that and decided to catch more aggressively when the opportunity presents.

So last night just before doggo and I went to bed I set out a bucket.  Around lunch today I harvested about 1.3gal of water from it.  I strained it through mesh and then coffee filter to remove debris the wind had blown in.

Given that identical buckets stack and therefore don’t take up much more room than a single bucket, I might pick up one or two more to increase water catchment.

My Verizon MVNO is crazy slow outside Pahrump right now.  Granted, I blew through my 12GB allotment and am now capped at 128kbps, but I’m