For 2020 the US federal income tax standard deduction is $12,400.   Folks who are earning (or withdrawing from retirement) $1000/mo or less in 2020 have effectively opted out of the federal income taxation[-is-theft] matrix.

The flipside of that position is to minimize any burden I might put on the federal govt.  I do use public lands and do my best to “leave them better than I found them” as the Boy Scouts say.

[few hours break, and a hike]

Speaking (broadly) of this, doggo and I went for a nice hike this afternoon.    These features are huge although it’s hard to tell on camera: 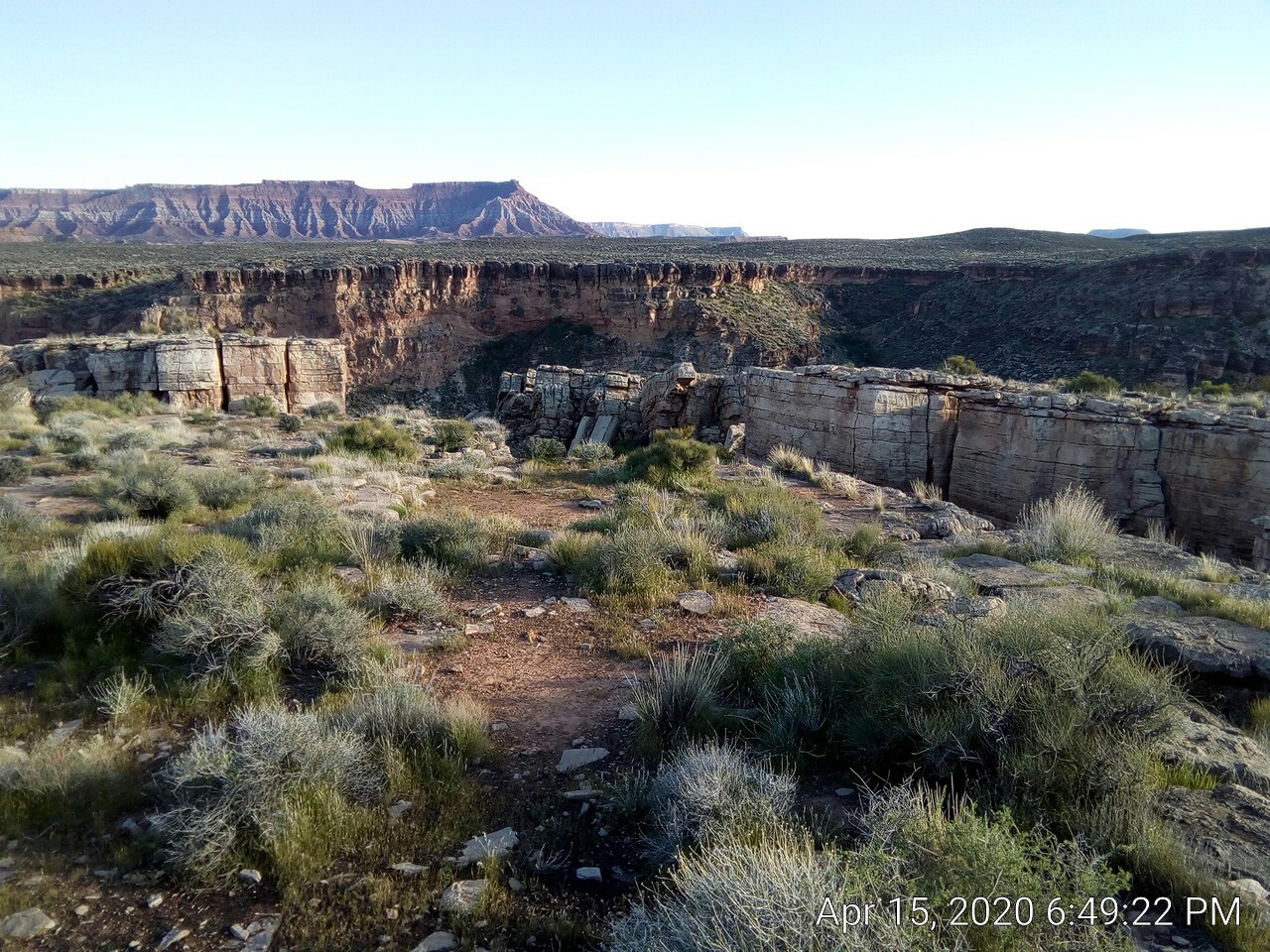 Def not Grand Canyon huge, but one sees the family resemblance to that area (150mi away, IIRC).

On the way out there we passed a BLM sign that said ‘NO CAMPING DOWN THIS ROAD”.  The part that said “EXCEPT FOR AIRSTREAMS” must have faded away: 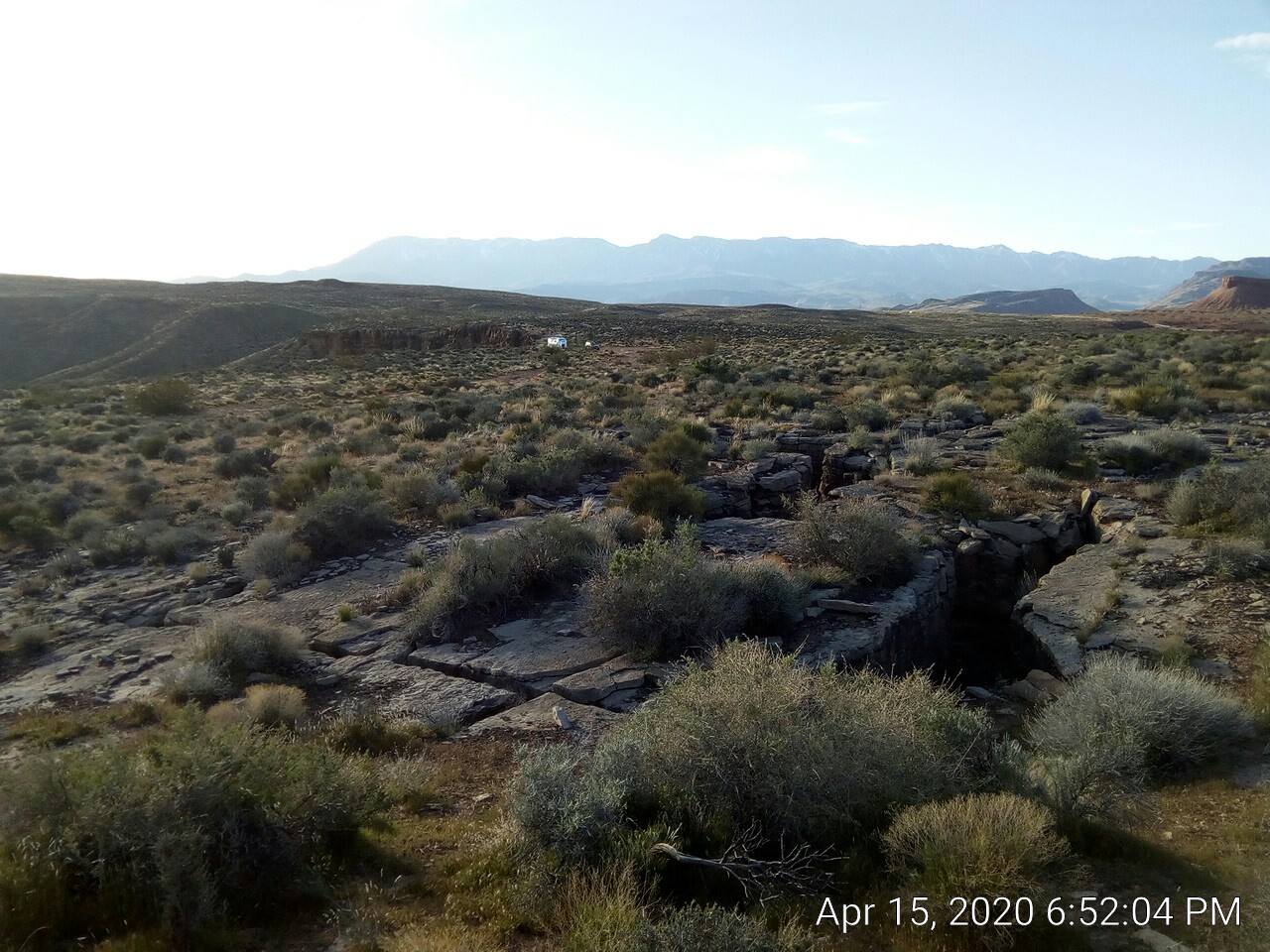 The dirt road is strewn with small boulders.  “I hope that guy doesn’t break an axle or shred a tire on the way out”, he said with a straight face.

Technically this is my last day of employment even though my last actual day of work was Dec 27th.  I turned off the alarms on my phone and am quite happy to sleep and wake with the sun.   It’s weird having dreams again (and remembering them).

Presently doggo and I are stopped in a rest area with a pond and field of grass.  It may be the first of either that Muffin, an El Paso native, has ever seen.  She has flopped over in the grass, absorbing sunlight.

I’ll find a safe spot to hunker down tonight away from drunks.

Due to (yet another) schedule change I will have one full workday after this, 12/27.

Here is Muffin hanging out in the driver’s seat this morning: 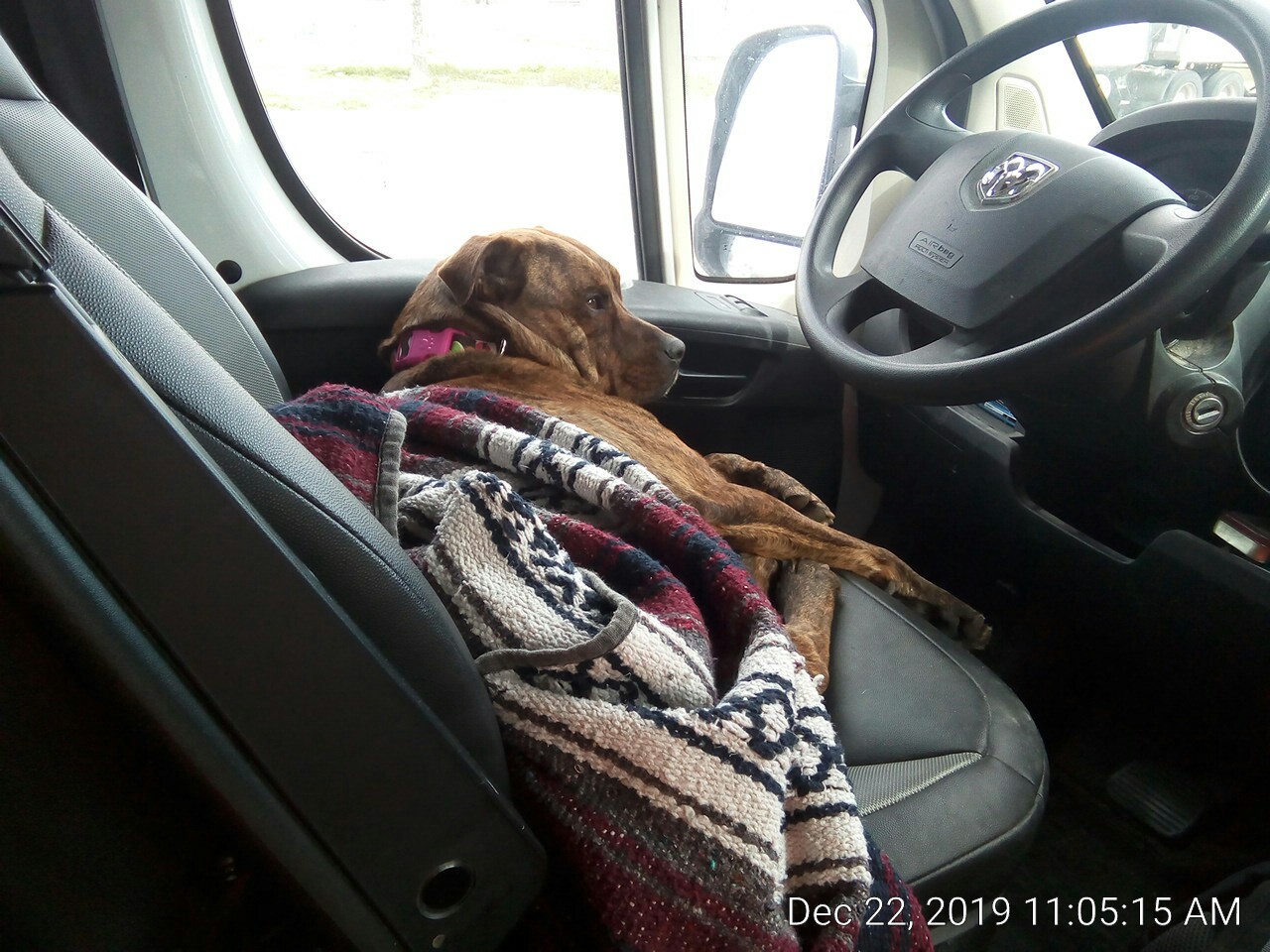 It was 37F this morning in the van (below freezing outside) so I threw a Mexican poncho over her.  She is totally happy to lay under blankets.

We were on my mummy bag this morning, with a serape similar to the poncho over us.  Nice and cozy, I had no idea how cold it was.  The nearly-still air is misleading.   I run the maxxfan on lowest  speed in the winter but you can’t feel the air moving unless you are right under it.

The biggest thing is I am retiring from work on Dec 31st.   It’s earlier than I had planned, but my work schedule has been increasingly terrible with no end in sight.   In a way I am grateful for the bureaucratic inertia and stupidity that encouraged me to look at all my options again.  It’s like Kafka only with a happy ending.

Because of the holidays, I’ve only got a few real working days left.  I work this weekend, a half day next week, and the last two days.  In all cases, the office will be abandoned as all the Normal Office People have taken off.  I am also on standby duty answering emergency calls while the office is closed for Christmas but I can do that from the camper.

In January I will make a run to the DFW area to visit family before heading out.  I’ll go back out west after that.

a doggo of my own 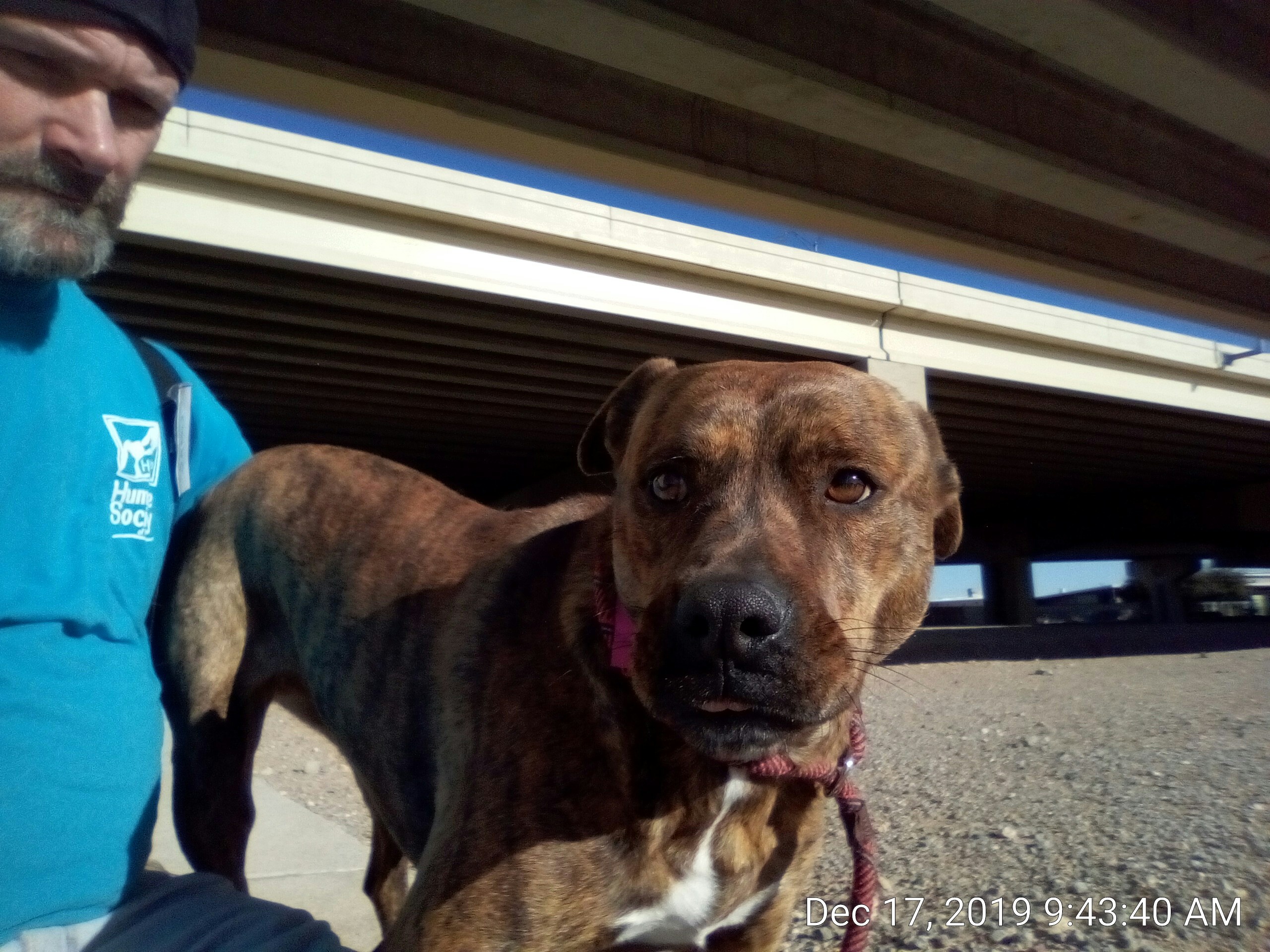 This is Muffin (nee Candy Corn), a 50-something pound pit/boxer mix I had walked many times at the shelter.  Because of the holiday/weekend schedule I could adopt her now, ahead of my retirement proper.  She’d been at the shelter for 10 weeks, and had been transferred there from the ELP city shelter before that.  I think her eagerness and strength were a bit much for the average family perusing the used dog lot.  She put her front paws on people when she had visitors and could easily push down a small child.

Once out of the pen she settled right down and rarely gets on people.  If you are sitting or lying down, though, expect to have her in your lap.  She is housetrained, responsive to small leash inputs, and nonreactive to other dogs.  We were walking in the park 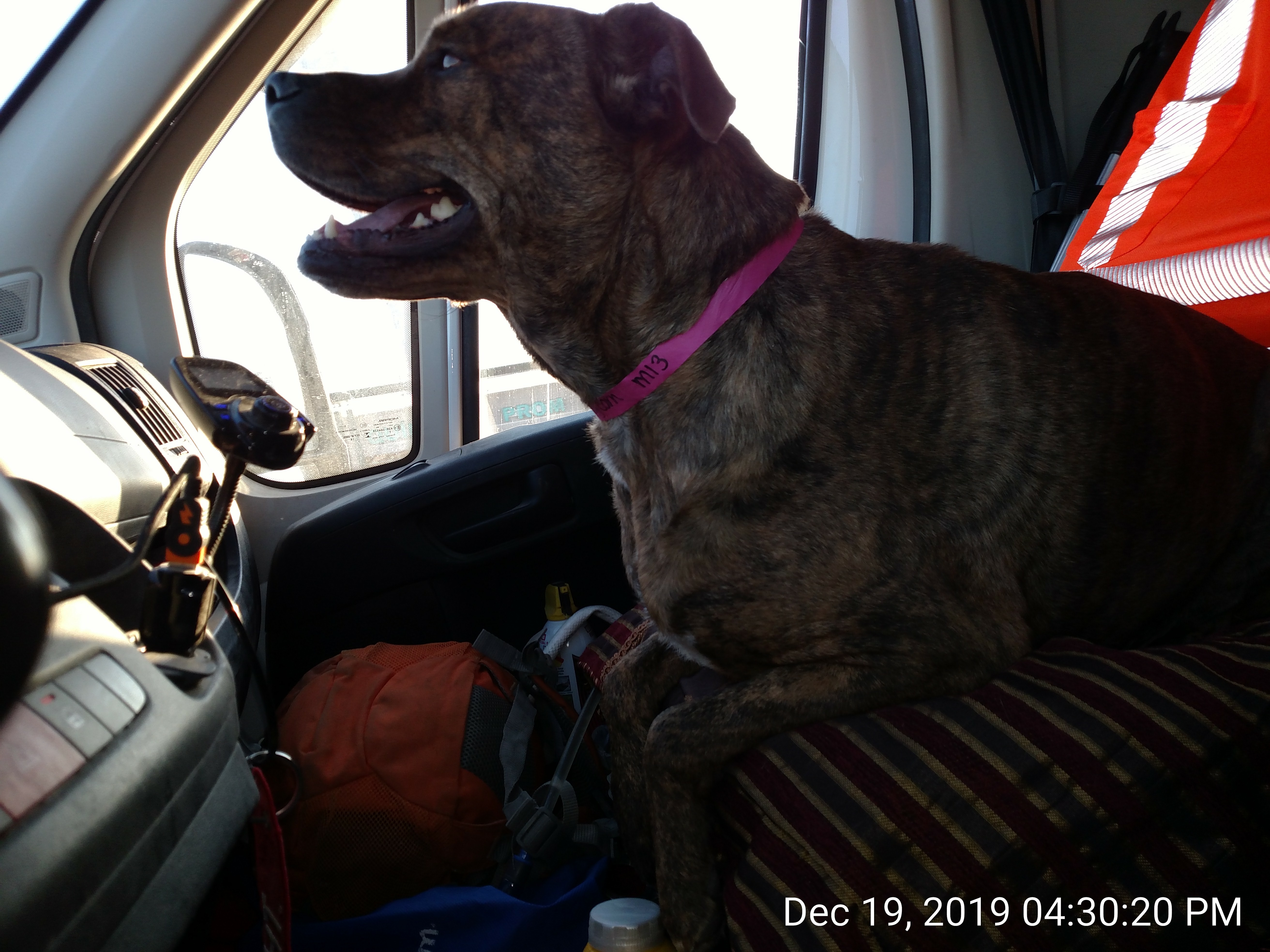 yesterday and a loose beagle ran up on her from behind — she was relaxed and they goofed around for a bit.  We walked by the dog park there and didn’t mind that other dogs ran up and barked wildly at the fence line.  Mutual sniffing ensued then she walked off.

This is in line with my observations at the shelter:  the most relaxed and attention-craving dogs were the pits.  They looked stereotypicaly scary but were dying to be touched by a person.

Muffin’s other good habits:  doesn’t tear stuff up, hasn’t gotten into garbage, sleeps right next to you, doesn’t bark except when people are around the camper, hops right in the van.  Not farty.  🙂

This morning we went to a farmer’s market where she was well-behaved and got some love from strangers.  Later we walked by the best local El Paso brewery, Deadbeach, and she walked right onto the patio.  Arm twisted, I had an excellent sour beer as we sat in the sunshine.  Bartender and a customer to see her and she did great.

For the past 4 years I have lived about an hour away from work by choice.  I make city salary and enjoy rural quiet.

There is a decent chance my boss’ boss’ boss will want me to be on-call 24/7 near work.  If that happens I will have to move closer, something I’d been thinking about already.  I’d be FT in the van, stealthing in cooler months and renting an RV lot or something during the warmer months.  All I really need is a 15A hookup.

Or I could transfer to the Big Bend or El Paso area and finish out my time there.  It’d almost certainl be a pay cut but:

I’ve been playing with the idea of working another 3.5 years, then living off 401K/457 until SS early retirement.  Living on that until my pension kicks in.

But if I was FT in the van in a low-humidity area I think it would not be a hardship.  And my pension will be based on the 3 highest years salary anyhow, so if I take a pay cut it won’t affect the pension.

I really hate humidity.  I hate it. Humidity oppresses me.

I was paying off my credit cards at $1200/mo, plus any unused funds that might show up.

Once they were paid off I starting depositing that nut into a 401.k instead.  I knew if was pre-tax, but I was still surprised when I had $200 more (net) than before in my checking;  of course it’s the difference of the tax that wasn’t taken out.

I’ll increase the contribution to $1400 to take advantage of it.

I was looking over my timecard at work and saw that I have about 4 months of sick/comp/vacation time accrued.

That’s not surprising for me, as I am out sick rarely and don’t take a lot of vacation time.  It just stacks up.  I never thought much about it before.

Turns out that when you exit (or retire, as is my plan) you are paid for that unused time in cash.  But the payout is done at one’s then-current pay rate, not at the rate one had when accruing the time.  So the time I accrued when I first started is now worth 1.5x the original amount.

I haven’t been conserving the time at all (taken time off when I wanted it) and at the current rate I will have about $45k to cash in when I retire.  It will go into a tax-deferred account or maybe used to buy the vehicle if I don’t have one by then.

I paid off my credit card debt and now the only money I owe is on my Honda motorcycle.

But the price on the of my military service credit purchase will increase 10% on Sept 1st.  So I think I will aim the snowballs at the service credit until that is paid back.

So I logged into my 401k site and opted to contribute the snowball each month to the 401k.  I’ll keep it that way until I pay for everything I want to with the 401k, then reassess.  That is probably 3-4 years out.

This is the progress I made today:

This is absolutely going to work.

My employer is having annual benefit enrollment right now so HR is hammered.  They will be done on the 12th so that next monday I will call and find out where to send my DD214.

I am finishing up paying off debt this year so I wouldn’t be able to buy it until next year.  Price will go up another 10% on Sept 1, 2017 so I’ll want to do it before then.