Chromebooks can do android apps, which is how I run Amazon Prime video.  It allows several different quality settings:

Many people have expensive unlimited plans;  my needs are simpler:

Generally speaking, the cheapest plans are not from the major carriers but from resellers who buy spare network capacity and sell it under their own name.   These are called MVNOs (Mobile Virtual Network Operator).  Sometimes an MVNO buys time from more than one carrier.

As I mentioned a few months ago I chose US Mobile, a Verizon and Tmobile MVNO.  I use the Verizon side of it.   They have a plan designer that helps you make the plan you want (imagine that!).

I use a generic Verizon-compatible android phone with this plan.  To get hotspot-type functionality I run EasyTether Pro, $10.

EasyTether uses android’s ADB functionality to route data from the phone out to bluetooth or USB.  The author maintains an epic collection of drivers for whatever you are connecting to.

Since we are interested in mocking up a hotspot it is simple enough to connect to a wifi router.

Originally I was using an MT-300A like the one on the left, $25.  It’s a tiny thing, sitting in the palm of your hand with plenty of space left over.  The place I wanted to install it didn’t do it any favors when it came to connecting to things outside the van.  I’d basically have to point the van in the direction of the open wifi.

I wanted more outdoor range so I picked up an AR300M with external antennas, $45.  The AR series is Atheros chipped rather than MediaTek;   apparently that’s a functional upgrade.  Also more RAM, etc.  The external antennas are nice, but the big win is the ability to change out those external ants for aftermarket ones with a different design or more gain.

The Verizon phones lives in the van, cabled to the router.

I carry a dual-SIM android phone with no paid data plan.

When I am around the van or public wifi I have normal data on it.  Otherwise I use offline maps like OsmAnd and have Wifi Map on it to help find accessible hotspots.  If no wifi is available the fpop SIM does its duty.

This setup works in two ways.

Pseudo-tethered:  it’s Verizon phone –> easytether –> minirouter == wifi inside and outside the van.  One benefit I hadn’t predicted beforehand was eating in a restaurant with no wifi.   I connect to the router in the van from my table and the laptop/chromebook is happy.

Repeater:  wifi (open or known password) somewhere  –> minirouter == wifi inside and outside the van.  If I am near accessible wifi and I have device/app updates to do, I connect the router to the wifi to save on mobile data.  The aftermarket antennas are so good sometimes if I am in a building with weak wifi it’s actually a stronger connection to my van’s repeated wifi than the building’s wifi directly!  Both of the minirouters have the ability to automagically connect to any known wifi SSID, so when you approach the wifi the router is already connecting to it.

Still loving this US Wireless, an MNVO.  They resell both Verizon (“Super LTE”) and TMO (“GSM LTE”).  The TMO is slightly less expensive but I imagine nomads will pick the Super LTE option to get Big V’s coverage.  USM has a fun/clever website, massively customizable plans, and discount prices compared to dealing with V directly.

I did the Planet Fitness “black card” membership because END_OF_DOCUMENT_TOKEN_TO_BE_REPLACED

Here are poll results based on this question:  Would you pay extra for dependable, fast internet [at an RV park]? 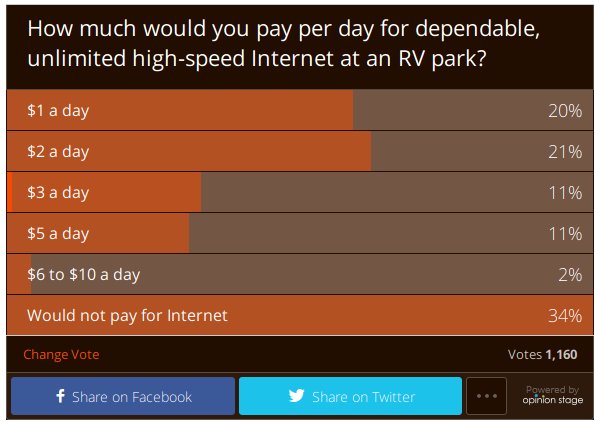 There are reasons why this may not be a valid comparison (they already have dataplans on their phones, etc).

When I go FT I would pay $60/mo and would be ecstatic with $30/mo.  I know I won’t pay $70/mo since I cut off my DSL at that rate and am getting by on the grandfathered Verizon 3G.

Are you under the impression that cellphone radio waves are more or less harmful than WiFi?

There is no point trying, John.  “You can’t reason someone out of a position they didn’t reason themselves into“.

…I would like to share what I do know about getting and using the internet in the hopes of informing a person that did not know how to while on the road. The thing is I doubt a new person would get to this point and see it.

No one’s replies are louder than any others.  Share what you know or END_OF_DOCUMENT_TOKEN_TO_BE_REPLACED

I’d read the Cheap RV Living forum’s Unlimited Verizon 3G $5 a month thread a few months back and it sounded like something I would like to explore.  After some experimenting I have cancelled my “broadband” (see below) and am currently running my sticks and bricks household off a $5/mo account and saving the $75 difference. END_OF_DOCUMENT_TOKEN_TO_BE_REPLACED

I bought a phone flashed with a grandfathered 3g unlimited plan from a private seller, who had in turn bought it from one of the [in]famous eBay device flashers.  This particular device is a Zone 2 (vs415pp).

It came rooted with Wifi Tether Router installed.  Over time WTR started getting flakier and I dorked up the settings.  Eventually I couldn’t get it to work at all.

[Note:  this entry is based on a CRVL post]

I am still in a house but I have been living on very little for several years in order to pay off debt from a previous life.  🙂   Now I snowball that same debt payment amount into pre-tax accounts so I am still living on the same pittance.

As I wrote this up I realized it might seem a bit like a hair shirt;  it’s really not.  Now I see frugality as a game and a challenge.  Here is how I live on little:

Email is something we take for granted until we can’t get it; then it’s a First World Crisis.  Luckily email can be extremely efficient because text is cheap to send/receivetext.  And since so little data is moved in minimal setups you can often get email through when nothing else works.

We need to look at the two major ways to do email:  webmail and traditional email clients.

Webmail means accessing your email via a webpage END_OF_DOCUMENT_TOKEN_TO_BE_REPLACED

There are two entangled ideas here:

We will address the data side of these but it will also pay off when you find your bandwidth limited by crowding or limited reception.

Why you need to know about how webpages work

You don’t have to be a geek but understanding the basics will help you control your data use.  The most important thing to understand is END_OF_DOCUMENT_TOKEN_TO_BE_REPLACED